Isla Muerta (Spanish for Island of Death), dubbed "Site C" by the United Nations, is an island nearly 200 miles off the coast of Costa Rica. In Return To Jurassic Park (Special Edition), it is actually larger than Isla Sorna. Like Isla Sorna, it is apart of the Five Deaths island chain. The island serves as the primary setting for the aforementioned series.

Unlike Isla Nublar and Isla Sorna, Isla Muerta was not owned by InGen at any time in its past. Because the island is surrounded by mist and nearly impossible to get on, even with a boat, the island has had few interactions with humans throughout its history.

In January of 2012, the overpopulation of Isla Sorna was brought to the attention of the United Nations, and it was decided to capture and transport some of the animals to Muerta. By March, a successful dinosaur population had been established on the island and the United Nations marked it a national preserve. Nevertheless, in September 2012, InGen, seeking to open a new Jurassic Park in the United States, obtained permission from the United Nations to obtain dinosaurs from both Isla Sorna and Isla Muerta.

However, later that month, a Costa Rican Coast Guard vessel, charged with the monitoring of the island's coast, is attacked and all on board are killed. In response to this, a team of scientists and paleontologists are dispatched to discover what, if any, role the island's prehistoric inhabitants had in the incident.

Like Isla Sorna, Isla Muerta is a volcanic island. The island is lined with enormous mountains and steep volcanic cliffs. Overtime, the island became covered in coniferous forests. The island is much larger than Isla Sorna, being the largest island in the Five Deaths. The island can only be reached by humans via airplane, as the coast lines are lined with jagged and inhospitable cliffs, the only entries from the coast being a series of caves. It is also constantly shrouded in a thick fog.

As far as population distribution goes, the island is host to a wide range of dinosaurs that, by this time, are the offspring and the grand-offspring of the original cloned dinosaurs, created twenty years ago by InGen. Like with Isla Sorna, the dinosaurs on Isla Muerta roam free and there are even fewer human installations on the island for them to interact with than previous islands. For the most part, due to the enormity of Isla Muerta, the apex predators, such as Tyrannosaurus rex, live in the more mountainous, densely forested center of the island, while the herbivores tend to stick to the outskirts of the island, where the land is more flat, and there is an abundance of clearings in the forests, as well as thinner brush.

The island is wrought with ravines and even has several freshwater watering holes scattered throughout the island, a common gathering place for herbivores, and hunting zone for the carnivores. Two small rivers jut their way through Isla Muerta, emptying through a large cave that bores through the side of the island. Because of the large fish population that crosses through these rivers, fish eating dinosaurs, such as Spinosaurus, can be found stalking the woods around these rivers, as well as along their banks. Climate-wise, Isla Muerta, like the other islands in the Jurassic Park franchise, is located in a hot spot off the coast of Costa Rica. The climate there is tropical, though at nights it manages to get cold enough to see one's breath.

One of the only human facilities on the island, the United Nations owns a small outpost housed in the northern mountains of Isla Muerta. The primary function of the facility is to allow for a safe location to study the animals that inhabit the island, as well as to ensure that no trespassers disturb the natural harmony of the island, nor try to poach the dinosaurs. Due to repeated attacks by the Pteranodons, the United Nations had a large, cage-like structure build around the facility's perimeter, which also makes it a dinosaur-free zone.

To prevent causing an extinction on the island, only a few carnivores from Isla Sorna were transported to Isla Muerta. The most famous of these is the Tyrannosaurus rex. Five Tyrannosaurs, consisting of four adults (two females and two males) and one juvenile, were released onto the island to allow for a breeding population. A pack of Compsognathus were also released on the island, and tend to live closer to the island's edge, near some of the watering holes. In addition to this, two Carnotaurus were moved to the island — one male and one female. While it is unknown if the two will ever breed, the Carnotaurs share the same territory as the Tyrannosaurus, often leading to fights among them.

Two juvenile Spinosaurus were placed on the island, thought to be the hatchlings of the Spinosaurus involved in the Isla Sorna incident some seventeen years prior. Since then, however, these Spinosaurs have grown into full-fledged adults, though it is unknown if they have bred to produce anymore of their kind. As mentioned in the previous section, their territory consists of the rivers, and the forests surrounding the rivers, of Isla Muerta. They primarily stick to hunting fish, which they can find in abundance in the river, but, in the event of a lack of food, they will hunt other dinosaurs. This can often lead to conflicts with the Carnotaurs and the Tyrannosaurs, as they are the primary hunters on the island. There are also a pack of Allosaurus on the island.

Unlike the carnivores, there is a large variety of herbivore species on Isla Muerta. While the island, oddly, contains no Brachiosaurus, like the other two, it does contain a large herd of Mamenchisaurus; another long-necked sauropod species of dinosaur. In addition to this, herds of Parasaurolophus, Gallimimus, and Corythosaurus are common throughout the island. Although scarce, Triceratops live in small herds in small patches of clearings spread across the island as well. The island contains one massive heard of Stegosaurus, which reside on the northern part of the island, near the mouth of one of the rivers, deep within the woods. It is unknown why this herd likes to remain isolated, but it is likely to avoid predators, as the main carnivores on the island, such as Tyrannosaurs, usually hunt where the other herbivores group.

Non-dinosaur creatures created by InGen, such as the Pteranodon, also inhabit the island. Unlike the other prehistoric creatures that live there, these were the only animals not transported from Isla Sorna by the United Nations. Rather, these Pteranodon migrated to Isla Muerta after a territorial dispute with another flock on Isla Sorna. They hunt along the rivers of the large island. Because of their territorial and aggressive behavior, the Pteranodons can make it difficult for planes to land on Isla Muerta. Coast Guard vessels also have to be wary of them, in case they stray from the island in pursuit of fish from the nearby ocean.

Worldwide attention was drawn to the island, however, not because of its land or air-based inhabitants, but rather, because of its sea dwelling ones. InGen had not published a list of marine reptiles to clone, having done so in secret with the intention of opening up a marine facility alongside the original Isla Nublar park. Unbeknownst to the United Nations, and InGen themselves, several Tylosaurus migrated from Isla Sorna's broken down marine containment facilities to Isla Muerta to take up residence in the numerous underwater caves that dot the outskirts of the island. In addition to this, several Plesiosaurus also live off the coast of the island, moving through the island's deep river channels at times by entering through underwater caverns.

However, the most dangerous inhabitants of the island, land, sky, or sea, are the two Mosasaurus that prowl its coastal waters. These two apex marine carnivores were responsible for the destruction of a Costa Rican Coast Guard vessel, and the death of its entire crew, leading to the start of the series. They are fiercely territorial, and will attack on sight. Like the other marine prehistoric creatures on the island, the Mosasaur will use the underwater caverns to enter the deep river systems of Isla Muerta, allowing them to hunt any herbivores, and sometimes, even large carnivores that approach too close to the rivers' edges. Because so little is known about these creatures, due to InGen's dishonesty in their creation, it is unknown whether any of the marine animals are breeding, and thus, creating a breeding population. 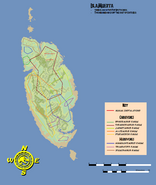 A population distribution map, show the major dinosaurs and their ranges on the island. 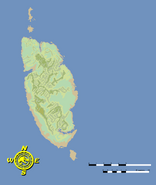 The basic map of the island.
Add a photo to this gallery

Retrieved from "https://jpfanon.fandom.com/wiki/Isla_Muerta_(Ten_Tails)?oldid=44647"
Community content is available under CC-BY-SA unless otherwise noted.